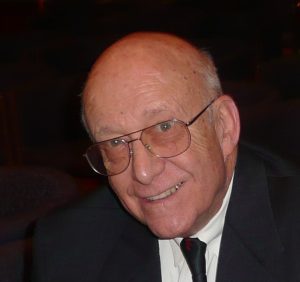 Born and raised in Newark, NJ, he earned a B.A. from Yeshiva University in 1954, M.A. from Columbia University Teachers College in 1955, and Ph.D. from Syracuse University in 1964. He served in the U.S. Army from 1956-1958. From 1964-1981 he taught at Michigan State University in the Department of Psychology, attaining the rank of Professor. From 1982 until he was in his 80s, he had a private practice of clinical psychology. He loved teaching and clinical work.

Jewish to his bones, Art was well-known for his sense of humor, his use of Yiddish expressions and jokes, and his detailed reading of Hebrew texts. He was a founding member of Congregation Kehillat Israel in Lansing. In late middle age he took up competitive ballroom dancing with Betty, through which they made many friends. He loved travel, cooking for friends, and conversation, which was often discursive, and sometimes hilarious.

In lieu of flowers, contributions may be made in Art’s memory to Congregation Kehillat Israel.

Dear Betty, I am so sad to hear the news of Art’s death. You are in my
dearest thoughts today.
I enjoyed sharing with him each time we met. Such a kind and interesting man.

Deepest condolences to Betty and family on your loss of Art. You’re in my thoughts.

Dear Betty,
My thoughts are with you and your family. What a rich and vibrant life. The world is a little dimmer without Art.
—Diane Levy

Deepest condolences to Betty and the family. Art was a great spirit and an exceptional counselor. I can only think of the light he brought to the world. As the saying goes when you find the light of the world you can see to the end of universe.

Love to Art, Betty and family. I met Art and Betty at a dance competition and have stayed in contact for years. One of the greatest joys in the world was watching Art and Betty dance together. If only we could all love as they did!!! Dance on Art! You will always be in my heart.

Deepest condolences for your loss. The world has lost a brilliant light.

You two have been a wonder together, Betty! And what a life you built. So much to celebrate. Condolences to you and your family.

I got my PhD in 1971 in art was on my doctoral committee, He was a fantastic mentor.

My uncle, Arthur, held a space in my head for 81 years. I adored him. My condolences to Betty and my cousins.

I am so sorry to learn of Art’s passing. He was a fixture in my life for many many years growing up at KI.

Holding you gently in my heart,