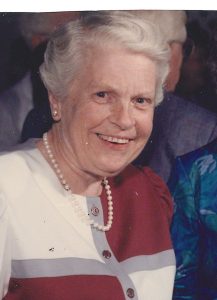 Age 96, passed away on June 4, 2021. Ardath was born March 22, 1925, in Jackson, Michigan, the youngest of three children to Reuben and Tressie Scheffel. In 1947 she and her parents moved to Lansing to join her brother Robert and sister Dorothy and their families. She began babysitting for both family and neighborhood children. Over the years she took care of over 30 children, concluding with twins Kristen and Carolyn Hicks daughters of Kathy and Steve Hicks. She enjoyed singing in the church choir at St.Paul Evangelical and Reformed Church, bowling in a league, researching and then writing a family genealogy, and helping her father Reuben construct toys for the R.J. Scheffel Toy Project. She enjoyed traveling with a friend (Iva) to such places as the Grand Old Opry, New Orleans, Utah, and Siesta Key. When it became necessary to leave her family home in Lansing, she moved first to Independence Village in East Lansing and subsequently to the Ingham County Medical Care Facility in Okemos. In both places she received wonderful care and attention. She is survived by her nieces Mary Beth Scheffel, Susan Scheffel Roosenraad (Cris), and Janet Wall (Doug) and nephews Steven Scheffel (Marilyn) and Jack Schoettle (Kay); she is also survived by numerous great nieces and nephews. Special thanks to all the nurses and aides at Ingham County Medical Care Facility for their care and loving kindness.
She will be missed a great deal by many.
There will be a private interment to take place in East Rives Cemetery, Jackson County, Michigan. Memorial donations may be made to the R.J. Scheffel Memorial Toy Project, P.O Box 23181, Lansing, Michigan 48909. Arrangements are by the Estes-Leadley Greater Lansing Chapel.

I have found memories of Ardath. She lived up the street from me during my childhood on West Rundle. The neighborhood kids would stop by the garage while she, and her parents worked on wood toys.
Ardath baby sat my brother and me.
When I had my son, I hired her to sit for him. I hired her while I was pregnant to sit for my son in the first few weeks of his life. I knew I could trust and depend on her to care for him the best of anybody.
May she rest in peace.