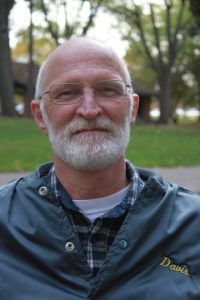 Allen graduated from Lansing Eastern High School in 1970. He was employed at St. Lawrence/Sparrow Hospital from 1967-2010, where he retired early due to complications of Multiple Sclerosis  He took great joy in spending his days with his Emotional Support dog Raelynn, who he adopted from the Greater Lansing Humane Society. He knew the moment he met her that she was the one and cherished all their time together. She will continue to be cared for by Stacy (daughter) and loved by the whole family.

Allen was preceded in death by his parents Willie Davis and Ina Lindsley, brother Hugh Davis; and brother-in-law, Choyce Rutherford

Per Allen’s wishes, cremation will take place and no service will be held. In lieu of flowers, memorial donations may be made to the Multiple Sclerosis Foundation or the Capital Area Humane Society. The family is being served by Estes-Leadley Funeral Home. Online condolences maybe shared with the family at www.estesleadley.com.

Although its been about 35 years, I remember the strong man you were back then. Rest peacefully, Mr. Davis. To his family and friends I send my condolences.

Thank you for your kind words Christina

Thank you for your kind words Christina

I will always remember visiting his home with Debra and the family. He had a warm smile and definitely was a jokester. He loved his family. I will always remember the stories he would share about how much trouble he would get into with my dad and the things they would do to their sister Aunt Marita. Uncle Al was a true fighter for sure with a big heart! I don’t think I will ever know anyone else who would love their dog More than he loved his dog Raelynn! She was definitely the sunshine in his life. I am sending my love, prayers and condolences to the family. He is finally at peace and pain free. R.I.P. UNCLE AL (aka Uncle Mike)

Thank you for your kinds words

I first met Al when he came to work in the Pharmacy at St. Lawrence from a program at Eastern run by Ernie Merry (sp?). You never lacked for conversation when Al was around. Our paths continued to intersect for another 30+ years. Al was a good soul, and a good employee. May he rest in peace. John Lower

Thanks for sharing the history and the kind words.

I knew Al from working in the St Lawrence pharmacy. Al was always in good spirits no matter the day or circumstances. His sense of humor really kept us going. RIP Al.

Thank you for sharing your kind words.

I knew Al as an employee, in Engineering, at Sparrow Hospital. He was kind, laid back and reliable. Many nights we called him to come up to Labor and Delivery, for one reason or another, and he was always willing to help with whatever we needed. Al your Sparrow “family” will remember and miss you. My sympathy to his family. Beautiful photo of him.