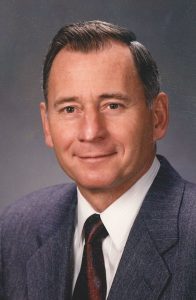 Born on June 16, 1940 in Battle Creek to Edward and Darlene Claypool, Allan was known for unparalleled integrity, perseverance and work ethic, characteristics that propelled him through life.  He graduated from Battle Creek Central High School in 1958.  He received an appointment to the U.S. Naval Academy, graduating in 1962.  His first assignment was on the USS Earle B. Hall, a destroyer escort-transport that participated in the Cuban missile crisis blockade. He was later assigned to the USS Kirwin.  He was operations officer for destroyer squadron DESRON 36 while serving in the Mediterranean. His last ports of call included Norfolk Naval Base and Little Creek Naval Base in Portsmouth, Virginia at the rank of Lieutenant.  Naval education and experience forever shaped his life.

During his last year in the Navy Allan returned to Battle Creek and sought the company of Cathy Sipe, a high school acquaintance who had caught his eye.  Cathy married Allan in 1966 and their journey of 53 years began.  Allan found Cathy a match in integrity, work ethic, intellect and curiosity for life.

Following his service, Allan and Cathy moved to Ann Arbor so that Allan could attended the University of Michigan Law School, graduating in 1969.  Thereafter, Allan and Cathy moved to Lansing where Allan joined the law firm of Foster, Campbell, Lindemer and McGurrin (predecessor to Foster, Swift), where he found mentors, colleagues and friends whose integrity mirrored his own.  Allan’s 50 years with Foster, Swift, the only law firm in which he practiced, was celebrated by the firm in the Summer of 2019.

Allan’s 50 years of legal practice was highlighted by leadership and intellectual pursuit.  He affected legal change and set precedent through his practice and legislative initiatives in estate planning, elder law and international taxation.  He was elected into the American College of Trust and Estate Lawyers and was invited to be a member of the International Academy of Estate and Trust Law.  He was also recognized in Martindale-Hubbell Bar Register for Preeminent Lawyers with Highest Possible Peer Review Rating in both Legal Ability and Ethical Standards since 1983, as well as Best Lawyers in American (1983 – 2020, Trust and Estates; Tax Law).  He was Chairman of the Estates and Trusts Committee, Legislative Committee of the Probate and Estate Planning Section for the State Bar of Michigan, Director and past president of the Ingham County Bar Association, and former Chairman of the Ingham County Bar Estate and Trusts Committee.  In 2007, Allan received the Leo Farhat Outstanding Attorney Award from the Ingham County Bar Association, an award presented to an attorney who has “distinguished himself or herself by manifesting exemplary character, integrity, judgment and legal scholarship while adhering to and advancing the highest principles and traditions of the legal profession.”

Allan’s community service included Former Chairperson for the Mid-Michigan Chapter of the American Red Cross, which honored him with the Clara Barton Award in recognition of his volunteer leadership.  He was also Past Director of the Greater Lansing Symphony Association, Past Director of the Michigan State Chamber of Commerce and Past Member of the Rotary Club of Lansing.  While Allan’s life was highlighted with career accolades and leadership, Allan wasn’t one to seek the spotlight.

Allan’s favorite place was on the beach, in the sunshine and with his family, including his two children of whom he was very proud. He has been described as soft-spoken with an endearing laugh. He was often impatient and always determined.  Allan was a true sailor.  He and Cathy traveled the world and no matter whether rafting on the Colorado River or sailing the Baltic, Allan was drawn to the water and sought the bow of the ship.  When not at Sea, Allan’s back porch garden sanctuary was his favorite spot.  Fishing was another favorite past time, preferably with his grandsons, whether on Glen Lake, in a Montana stream or at a local pond.

Allan is survived by his wife, Cathy, daughter Lisa (Robin) of Pittsburgh, and son Alex (Hilary and grandsons Benjamin and Thomas) of Shanghai.

A private graveside service will be held at Marengo Pioneer Cemetery in Marshall.  A special thank you to the extraordinary care provided to Allan at his greatest time of need by the ICU at McLaren Hospital in Lansing.  Honorary pallbearers include: John Barkham, Anna Gibson, Jim Jensen, Charley Janssen, Steve Jurmu, Gary McRay and Mike Sanders.

For those wishing to honor Allan through a donation, the family suggests the Veterans of Foreign Wars, P.O. Box 8958, Topeka, Kansas 66608-8958 or any charity of your choice.

If I am inclined to doubt, steady my faith;

If I am tempted, make me strong to resist;

If I should miss the mark, give me courage to try again.

Guide me with the light of truth and give me strength

Allan was a strong supporter of Fenner Nature Center. He offered legal advice pro bono over the years, and was especially helpful when Friends of Fenner Nature Center evolved into Fenner Conservancy so we could manage the park and its programs. We had to rewrite our incorporation statement and bylaws as well as create a wide array of policies to guide our operations. His help was critical in that effort. Given his many responsibilities with Foster Swift, this help was a very generous offer. As president of Fenner Conservancy at the time, I greatly appreciated his help. My deepest sympathies to his wife, Cathy, who has also helped Fenner in many ways over the years.

Dear Cathy:
We are truly saddened by this news. So sorry for you,
Lisa and Alex and grandsons.
Card will follow.
Love and sympathy from Joe and Gloria Caruso

I always enjoyed chatting with Al at the MAC about daily topical events. My condolences to the family on the loss of your loved one. Our thoughts and prayers are with you.

Allan was a great guy to work for (1987-2012). We worked hard for our clients, and he always made me feel like a valued team member. I figured out early on that if I would have his lunch waiting for him when meetings were running close together, that he was a much happier camper, and we would always seem to get through the afternoon so much better. He gave me a lot of responsibility and I learned a great deal from him. He will be missed.

I was saddened to learn of Al’s untimely passing. I knew him for many years, working with and for clients we had in common while I was employed at trust institutions in the Lansing area. Reading his obituary brought tears to my eyes. From what I experienced, everything you wrote about his professional life was absolutely right on! I know that he will be deeply missed by many, not only by his family and friends, but those of us who were only casually acquaintances; those of us he may not even have remembered…..

Cathy, Julie and I were shocked and saddened to hear this terrible news. Al roomed with Bill Vogel and myself our first class year at the Academy. It is difficult for me to realize that they both are gone now. Our thoughts and prayers are with you and your family.
Julie & Frank Cleary

Al and I were room mates our Plebe, Youngster and Third Class years. He as always delightful and was the epitome of what an upper classman should strive to be. I have a difficult time accepting that his is gone, but retain such fond memories of our time together, although, in latter years, it was just during our periodic class reunions. My wife Jackie, Al, Cathy, and I always found time to carve out time to sit down and swap stories, updates, and memories during those short hours together. I remember well my parents meeting Al’s mom during Plebe summer and my mother always asking about Al and his mom. I’ll miss receiving Christmas cards from both Al and Cathy, but will always remember our times together. Our thoughts and prayers are with you, Cathy.