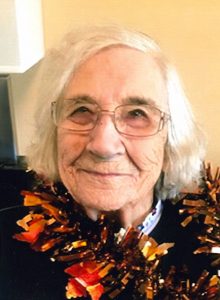 Our loving mother, grandmother, great-grandmother and wonderful wife to Ted Stoecker, for 67 years until his death in 2006, died peacefully on January 26, 2021, in her sleep, at age 100, at Regency West Nursing Home, Lansing, MI.  She was born on May 13, 1920, in the small town of Wilton, Burleigh County, North Dakota, to Carl and Hazel (Bly) Gilbertson. She was raised and educated in Wilton graduating with the class of 1939.

In September 1939 she was married to Theodore “Ted” Stoecker in Wilton by the Reverend E.E Matteson. In June of 1941 Alice and Ted, following some relatives, temporally moved to Michigan in search of steady employment. This temporary move turned out to be an 80-year stay.  Alice was born before women could vote. WWI had just recently ended and the dust bowl days would come soon.  There were many small-town hardships, the Great Depression of the ‘30s, the WWII scare and rations, and the loss of an infant daughter. Through it all, she was an amazing woman.

Alice was a lifelong homemaker (domestic engineer). She was a longtime member of the Lansing Moose Lodge #288, ladies auxiliary.  She was a recreational aide for the Maple Grove School for several years. She sure enjoyed a good card game and one could stop by her house for a cup of coffee anytime. She will be greatly missed.

A private service will be held, interment will take place in Deepdale Memorial Gardens. Arrangements are by the Estes-Leadley Greater Lansing Chapel.

To Don and Pat,

I am so very sorry, Don, to learn of the passing of your Mother.

So sorry Jerry & Denice about Alice. She was such a nice lady. She use to have so much fun at cards at the 39ers a few years back. I seen her one year ago this month at Regency when my son was there. I visited her several times. She even remembered who I was. So sorry for your loss.

Thanks for your prayers and good wishes.

Jerry & Denice, we are so very, very sorry for you & your family’s loss. May The Lord & the many beautiful memories you made with your mom help to comfort you & give you peace.

I will never forget my (pseudo) Aunt Alice and her infectious laugh. She was one of the kindest people I’ve ever known (except when she caught Uncle Ted cheating at cards).

Keeping you in my thoughts and heart. Shelly

Wanda and Patti and Royce

Jerry and Denise,
Sorry to learn of your Mother’s passing. She appears to have had a life well lived. You are in our thoughts. May she rest in peace. Take care.

Jerry & Denise,
Sorry to learn of your Mom’s passing. Rest assured, knowing you brought her lots of happiness by taking her out to dinner and bringing her to cards at the 39’ers. Take care.

Sorry to hear about Aunt Alice passing. My memory of her her and Ted coming every other summer to visit us in ND. We longed from the day they left till they came back 2 years later. She was such a sweet and kind lady. Rest In Peace dear Auntie!