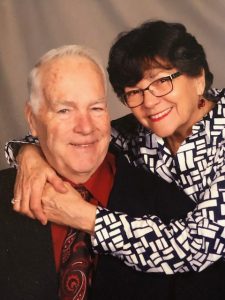 Alan also served as a brave Deputy Sheriff with the Ingham County Sheriff’s Department. Alan then worked for Consumers (Power) Energy where he retired in 1998 after 29 years of service. While working full time at Consumers Power, Alan also served on the Mecosta County Sheriff’s Department as a Marine Patrol Officer on the weekends and holidays at their cottage. Alan also received his bachelor’s degree in Business Administration from Northwood Institute while working full time at Consumers Energy.

Some people may also remember Alan as a country dance instructor at the Silver Dollar in Lansing and other locations throughout mid-Michigan as he taught hundreds of students over the years with his wife Bonnie. Alan also enjoyed playing in the “Cleeves Band” at many miscellaneous locations alongside his wife, brother Doug, cousin Ron and friends.

The family wishes to thank the wonderful staff at Hospice House of Mid-Michigan for their kind, caring, and compassionate care for Alan during his final weeks.

Thanks for your friendship over the years. You will be missed by so many. RIP Brother. John and Connie.

Dear Aunt Bonnie and cousins,
So sorry to hear of Uncle Alan’s sickness and death. You are in my prayers and cousins, I know what you are going through, you are not alone.

Sorry for your loss, our thoughts and prayers are with you and your family.

Bonnie and family. I’m so sorry for the loss of Alan. He will no longer suffer, If you ever want to talk to me, call me I am here for you Bonnie’

Al was a friend of mine for over 50 years, we hired in to Consumers Power (Energy) about the same time. I haven’t seen much of him since we both retired but we had some good times together at work and outside of work. Al tried to teach me Line Dancing with not much success, I will miss him very much. So sorry for Al’s family.

To the Cleeves family,
I’m so sorry for the loss of your loved one. My thoughts and prayers are with you at this difficult time.

Kim
Sorry to hear about the loss of your dad.He was a kind man to work with.I know your mom heart is broken and so is the rest of your family
Hugs to all of you!
Penny Cooper

Becky
So sorry to hear about your Dad. My thoughts and prayers are with you.

Dear Aaron Kim, and Cooper and the rest of the family . Don and I are sincerely sorry to hear this. Prayers for comfort and peace. Our thoughts are with you. Don and Cheryl Debri

Bonnie and family, I’m so sorry to hear of Al’s passing. I knew he was having a difficult time and am relieved to know he had good care in his last days. The best of neighbors and a helpful mentor for struggling musicians. Peace to him and his family and friends. Bob Hazel

Sorry for your loss.